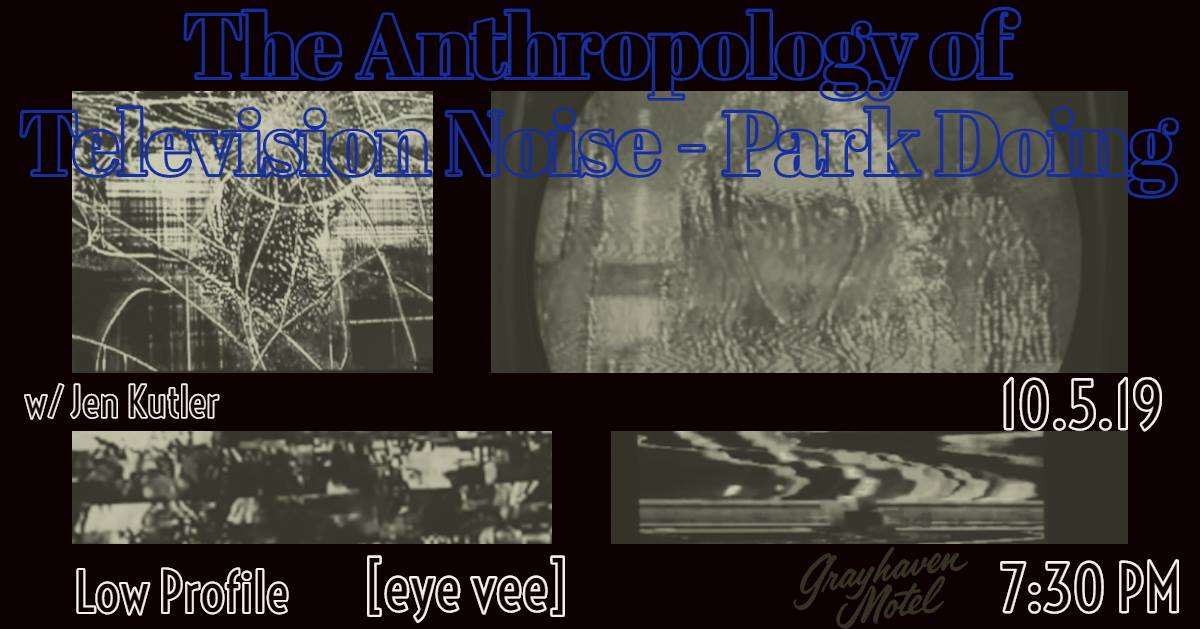 Please join us for an amazing evening at the Grayhaven as we launch EyeVeeTeeVee, our analog video transmitter on-site and video stream off site. We will have curated video and media art content 24/7 streaming from The Grayhaven with artists:
Erin Gee, Mike Sidnam, Jonas Bers, Hali Palombo, KPG, Sara Goodman, Spreaders, Paloma Kop, Eric Souther, Sofy Yuditskaya, Mike Mazzota, Id M Theftable, Matt Luczak, Al Margolis, + more
Please consider donating to help us raise money to keep this going and check out the studios and transmitter at the motel.

The historical evolution of television as told by the visual ‘noise’ generated by the evolving broadcast technology. We have all been exposed to the rhythms, colors, textures, motions, and other formal elements of different periods of television noise. What is the effect of this shared technological “unconscious”? Was the noise the real culture all along?

Part 2: (20 minutes) The Birth of Television

Live performance by Park Doing “playing” a “mechanical TV” from the 1920s and Ithaca Grayhaven Artist in Residence Jen Kutler playing her own collection of electronic noise-making devices. An enactment of “The Birth of Television”

Relive the history of television through the artistic noise made by the machines themselves and celebrate our continued cultural collaboration with them!

Park Doing is a philosopher, engineer, and artist whose works have been performed at The Anthology Film Archives in New York City, The Squeaky Wheel in Buffalo, NY, Cornell Cinema in Ithaca, NY, and Fitchburg State College in Fitchburg, MA.

Jen Kutler is a multidisciplinary artist and performer. She modifies found objects that are cultural signifiers of power, gender, queerness and intimacy to create atypical instruments and sculptures. Her performances feature many of her instruments incorporated with immersive field recordings to explore common and discrepant experiences of familiar social tones in immersive sound and media environments.
jenkutler.com